BRIAN ADORNETTO is a food writer, professional chef, and culinary instructor. For more information, please visit www.loveatfirstbite.net. Brian can be reached at loveat1stbite@msn.com.

Cuisine is as much about a sense of place and people as the food itself or the actual act of eating. Food (and how it’s eaten) serves as a means of identifying cultures, places, and peoples. Some believe that eating certain foods in their place of origin is stereotypical, but this is exactly what enables us to experience the true essence of a culture and its people. Such an experience offers a window into the landscape, soul, and character of a place.

As a professional chef, culinary instructor, and food writer, I repeatedly encounter grown men and women who refuse to eat anything that looks, smells, or sounds unfamiliar. Since moving to the South, I’ve met fellow transplanted Northerners who refuse to let grits near their lips or scrunch their noses at the mere mention of okra. Just as frequently I hear “We don’t care what you do up North; we’ve been eating just fine on our own right here” from countless Southerners. While both regions have significant food traditions, I find this mutual aversion frustrating, bewildering, and, quite frankly, unsavory.

As such, I’ve made it my goal to show how similar and easily fused the culinary traditions of these two proud regions are and to celebrate fare from both sides of the Mason-Dixon Line. With that as the underlying theme, this column will feature something slightly different each month, alternating profiles of people (and/or restaurants), recipes (original as well as adapted), important regional ingredients (and/or techniques), and articles (sometimes with opinion) on policies, history, trends, events, and other news affecting our foodways.

Occasionally, I will directly explore (and maybe poke fun at) this close-mindedness via each territory’s so-called stereotypical foods.

Obviously, some provisions have yet to make a successful journey to both ends of I-95. For example, if the only bagel you’ve ever eaten sat in a plastic bread bag in a supermarket or was purchased from one of those national bagel chains, one can understand why you’d be less than enthused about adding those bready, flavorless gaskets to your diet. The top of a good bagel is slightly brown and smooth, but not at all dull, while the bottom looks and feels a little rough. It has just a hint of a crust that you can feel with your front teeth followed by a delicious chewiness and a wonderful sweet-saltiness. Add a schmear (a swipe of cream cheese) and fuhgedaboudit: Heaven!

Of course, the same goes for the biscuit. Neither a tube of dough that you have to whomp on the counter to open nor a breakfast sandwich from a fast food chain comes close to the enchanting goodness of an authentic Southern biscuit. Light and fluffy, a proper biscuit is so delicate that it almost melts in your mouth. It’s buttery with a hint of salt and the ever-so-slight tang of buttermilk. Alone, a good biscuit is a delightful addition to any meal, but topped with sausage gravy or filled with a few slices of country ham, it’s life changing.

Admittedly, obtaining worthy renditions of both at the same time is difficult, but there is still plenty of room for the bagel and the biscuit at your table. You just have to adopt the mantra of the classic Crosby, Stills, and Nash song and “Love the One You’re With.”

Welcome to Where the Bagel meets the Biscuit. Here, it doesn’t matter where you’re from or where you are. Just open your mind; your mouth will follow, and your taste buds will thank you. 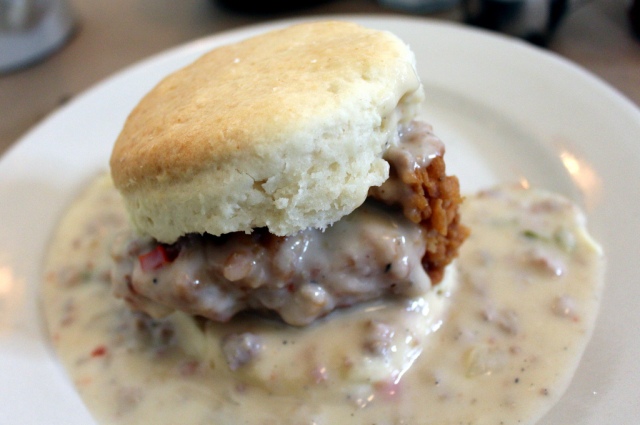 The Big Nasty Biscuit at Hominy Grill in Charleston, Sc. Photo by Wally Gobetz , via Flickr