Chef Ashley Christensen’s refined, ingredient-driven version of humble comfort food has made her a long-time favorite in the Triangle area (Raleigh-Durham-Chapel Hill) of North Carolina. Over the past few years though, the Kernersville, North Carolina native has received national attention with appearances on the Food Network and MSNBC and features in Bon Appétit and The New York Times. She was even named a 2013 James Beard Award finalist in the “Best Chef: Southeast” category. Despite her rising stardom, she remains rooted by her upbringing, continuously paying homage to her family, friends, and terroir.

More than just another chef/restaurateur, she goes out of her way to resurrect (or as she likes to say “activate”) neglected historical downtown Raleigh buildings for her projects while maintaining their unique original spirit. She serves on the boards of several non-profits and is a catalyst for community service. Personally, she has a terrific sense of humor and a stellar ear for music. In fact, in her college days, she was a music rep for a major recording label. 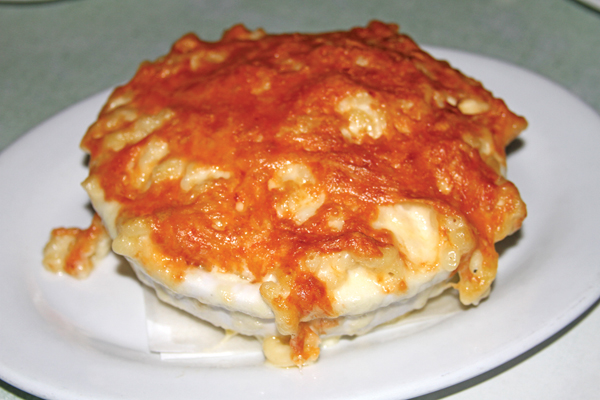 The Macaroni and Cheese au Gratin from Poole’s in legendary. Photo courtesy of Crash Gregg and the Triangle Downtowner

The chicken restaurant gets its title from the nickname Christensen’s mother gave her, “Mrs. Beasley”—the doll from popular 1970s sitcom Family Affair—and its chicken from Ashley Farms in Winston-Salem, NC, where only sustainable agriculture practices are employed. Consequently, no hormones, antibiotics, or steroids are used on any of Beasley’s chicken. The menu’s stars are chicken biscuits, chicken and waffles, chicken pot pie, and quartered fried chicken.

At Chuck’s, the burgers are made with daily ground, organic, grass-fed, cage-free, chuck (hence the name) beef. Homemade condiments, freshly cut fries, and hand dipped milkshakes (with the option to spike) round out the menu. Christensen’s bar is named after her father Robert, a Long Island native whose North Carolina friends dubbed Fox. The drinks here are so unique that you’re unlikely to find anything like them elsewhere.

Last year, Christensen opened Joule Coffee, cleverly named given that most people look to coffee for an infusion of energy, in a building that dates back to the 1920s and played a significant role in Raleigh as the city’s earliest loan office and an architectural benchmark. More than a coffee shop, Joule offers hot breakfast and house-made pastries, weekend brunch, and upscale luncheonette favorites, in addition to coffees from around the world.

In the coming year, she will further expand with the wood-fire-themed Death and Taxes, in a building formerly occupied by a bank and a funeral home. Above will be the Bridge Club, a catering hall set to offer options from all her restaurants and host special events. Below ground, in one of the old bank vaults, will be a bar to service both. If that’s not enough, Christensen’s also constructing a base for her operations in an old Fisher Sandwich Company facility where the former Raleigh business made convenience store triangle packed premade sandwiches from 1928 until 2009. This “Commissary” will house her offices, provide storage, and contain a prep and training kitchen. Meanwhile, the search has begun for a grower to develop a large-scale garden there, too.

But that only tells half the story. Christensen really gets excited when the subject turns to her philanthropic efforts, which began in the early 2000s when she was cooking at Enoteca Vin. Each year, the restaurant held a charity wine dinner to benefit the Frankie Lemmon School and Developmental Center, the first preschool-kindergarten in Wake County specifically designed for children with special education needs. The tuition-free developmental center has provided children ages 3-6 who may have developmental delays, language impairments, learning disabilities or mental deficits with an individualized educational experience that places special emphasis on communication skills and personal independence and gives their families instruction and support.

Christensen collaborated with national winemakers and sponsors who came into the restaurant to support this local program. Observing first-hand how it was helping families in Raleigh, she had an epiphany: Chefs and restaurateurs have the influence and responsibility to make a positive impact on their communities. She began teaming with those same winemakers as well as her good friend Eliza Kraft Olander to create private dining experiences that could be auctioned off to benefit the school; one such event raised $30,000 and led to an annual charity auction. Christensen now serves on the board of the Frankie Lemmon Foundation, the non-profit organization established to provide financial support to the school and is co-chair of its annual fundraiser, the Triangle Wine Experience—a three-day series of events and auctions—which, last year, on its 20th anniversary, raised over $2 million.

Another nonprofit near and dear to Christensen’s heart is the Southern Foodways Alliance (SFA), which documents and promotes the untold food stories of the American South. She founded its biannual event “Stir the Pot” where she hosts visiting chefs in Raleigh to raise funds for the SFA and offer a platform for their stories and food. The following day, she hosts an open house potluck at her home where the community is invited to bring a dish that represents a taste of their home. It has grown into one of the most anticipated food celebrations of the year.

The chicken and honey at Beasley’s. Photo courtesy Beasley’s

Similarly, Christensen hosts an annual multicourse fundraising dinner for Share Our Strength (a nonprofit dedicated to ending childhood hunger in America) where each course is prepared by a different visiting chef. She then works with the visiting chefs to create-one-of-a -kind experiences to auction off. Her last SOS event raised over $62,000.

Then, there’s a relatively new event that’s held the first Monday of every month at Fox Liquor Bar called The People’s Cocktail where a selection of five local, undercapitalized charities each inspire an original cocktail. Not only do all of the proceeds from each cocktail go toward each respective cause, but any tips given to the bartenders are donated, too! What makes the event even more special is that each of the five charities gets a chance to raise awareness and gain support not only in front of those in attendance but also via the bar’s social media accounts.

Christensen is also a board member of Raleigh’s Contemporary Art Museum—a “laboratory” that inspires its participants in new ways of thinking, seeing, and making. Thanks to its youth education programs, integration, and ability to stimulate personal awakenings, CAM has earned a reputation for its innovative approach to sharing ideas with the community. Christensen explains, “As much thought is given to the person staring at what’s on the walls as what hangs on the walls.”

Ashley Christensen is a passionate revitalizer who believes in what she calls “activating” or restoring the beauty that lies beneath the surface—whether in buildings, food, the arts, or people. She is an advocate who believes in inclusion, education, and the advancement of the opportunities surrounding us. She is an amazing chef, entrepreneur, and visionary who has remained true to herself and her roots. Ashley Christensen is a role model.

Brian Adornetto is a food writer, professional chef, and culinary instructor. For more information, please visit http://www.loveatfirstbite.net. Brian can be reached at loveat1stbite@msn.com.

One thought on “Where the Bagel Meets the Biscuit: Chef Ashley Christensen”